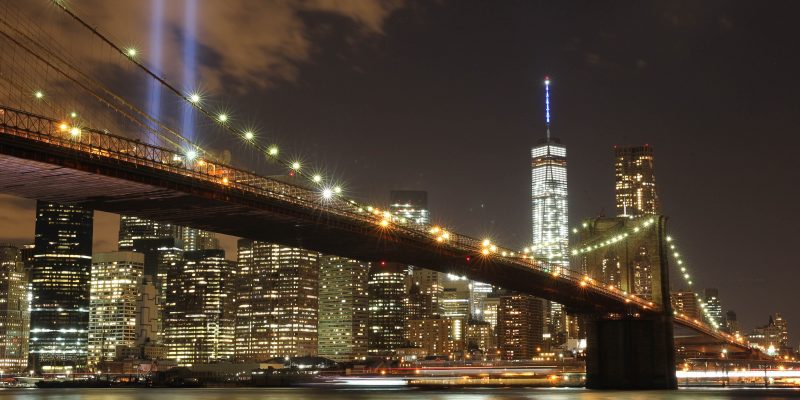 I woke up in my Queens apartment like any other Tuesday morning. Everything changed when I turned on the TV. NY1 News was showing live footage of the World Trade Center. A plane had just crashed into the North Tower. It seemed too unbelievable to be true. I had to get into the City to get to my job as an EMT.

Through the window of the 7 train, I could see the Twin Towers and a moment later only one. Then all Manhattan-bound trains were stopped. Passengers were rerouted to the outer boroughs via bus. As the second tower disappeared in a plume of smoke, more than a million workers and residents south of Canal Street were evacuating, mostly on foot.

There was no cell phone service. I didn’t know what was happening at work. I learned later that a few of my coworkers had grabbed their gear and made their way to the World Trade Center. I was able to get back into Manhattan the next day and went to a hospital to volunteer. They were already inundated with busloads of medical personnel arriving from New Jersey. I never found out what would have happened if my fragile heart had experienced Ground Zero first-hand.

For days no planes flew overhead. Buildings were closed out of respect or fear of further attacks, not just in New York but as far as Los Angeles, London and even Kuala Lumpur. For weeks the streets were plastered with photos of lost loved ones. “Have you seen my son?” “Have you seen my wife?”

The City was somber under a cloud of mourning. Yet we all felt a little closer and more united as a Community experiencing the same crisis. Our rough New Yorker exteriors softened a bit and I witnessed more kindness. There was also a palpable collective grief and anxiety. My meditation practice helped keep me grounded and life felt more precious. I experienced this interconnectedness as I took slower, deeper breaths and repeated mantras silently on the train.

When the pandemic began it had a similar feeling. Except it wasn’t an experience shared by just a city or a country. This was shared by a planet. Life changing. An indelible mark on a timeline forever separating “before COVID” from everything else. I wonder to myself when we look back in another 20 years, what will we remember and what will we have learned?

Photo by Claudio Schwarz on Unsplash